Two Days in Scotland (and two days on the M6)

First trip of 2011! And a bonus to the year's schedule too.
My friend, Kath, and I decided, as you do when not quite in touch with reality, to take a four-day midweek break to Scotland. The journey is 600 miles (each way), meaning two days in the car for only two days hiking. A small matter. We set off, drove ten hours from Sussex to Strath Spey, and fell upon plates of chilli and large quantities of beer like the motorway-maddened travellers we were. 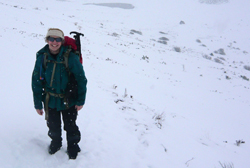 Having so little time, we had resolved to walk whatever the weather, and the following morning's steady snow-fall was no deterrent. With not a snowshoe, crampon, or axe between us, we headed up Ryvoan pass amply aided by our YakTrax (they're fab - review to follow). Our route deteriorated from a pisted track to ski lines, to ever-deepening footprints left by others. After lunch at the bothy we headed up the side of Meall a' Bhuachaille, the snow still falling silently.

A few had gone before us, but their tracks soon petered out, and we cut up the side of the hill through deep drifts. It was fun, but hard going, and as we reached cloud level - about half way up - we knew we just didn't have time (or energy) to reach the top. That's when the fun started. With snow up to our waists in places, the most effective way down was to bumslide or, where it was not steep enough for that, to roll. We laughed all the way back to the bothy. 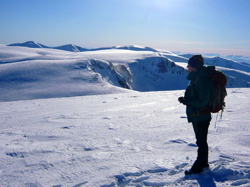 The next day the sun shone in a deep-blue sky, and we just had to get up a mountain somehow. Being short of time and unadventurous, we chose Cairngorm (I know, I know), along with hundreds of skiers. We fought a way up Windy Ridge, again in deep snow, dodging the off-piste boarders. The going got better higher up, but the wind became a burden, and the final push for the top was a slog. It took us over four hours for a climb that can usually be done in 90-min, max.

But the views. Ah, the views. We could see the entire Highlands. We could clearly make out Morven (77 miles) and Ben More Assynt (83 miles). It was the best visibility I've ever seen in the Cairngorms.

Sgurr Mor (1,100m) and the Fannaichs, 64 miles
The next day we drove home, having covered over 1,300 miles; but the trip was worth every one. I'll be back up in May and, with the hope of less snow and longer days, I've more great walks planned!
Posted by Leigh Forbes at 17:38 3 comments