So the weather turned in the end, but only on the last of seven fantastic days walking. This was just yesterday.

Day one of my final hike had been stunning: my mate, Alastair, and I had beautiful weather as we strolled up Glen Feshie.
It was only as we tramped up the Eidart that the showers began, heralding the foul conditions to come. We made and ditched plans as the weather worsened, finally deciding to set camp before making a packless-dash for Beinn Bhrotain; but as the cloud and rain came down in equal measure, thunder rumbled and the wind howled, we took cover and opted to sit it out until morning.

After a tent-testing night (gusting 83mph on nearby Cairngorm), we woke late to find the visibility had improved... from 10 yards to 20 yards. We gave up on Beinn Bhrotain (I had a train to catch), and turned towards Monadh Mor, heading for home.

The visibility got better as we dropped below cloud level, but we saw no other improvement. After a four-hour horizontal torrent on the Mòine Mhor finally put paid to my week of Scottish sun, we picked our way back down into Glen Feshie, and once again into glorious conditions (aside from the storm-force gale). We delighted in the knowledge that Beinn Bhrotain stayed cloudy all day :o)

The weather was fun in a way - a challenge for nav skills if nothing else.

Staying upright was my next ambition, and I mostly made it. Alastair, a local-born scot, cheered me with such observations as, "There's a good chance this mist might soon turn to rain..." He was wearing shorts.

I caught the train, and have suffered the wretchedness of swapping, in the space of twenty-four hours, the slopes of Beinn Bhrotain for the Victoria line at rush hour. Shell-shocked just doesn't touch it.
Posted by Leigh Forbes at 00:18 3 comments

Luck of the Devil

I am in Scotland.
When I came here last September, the weather was like this 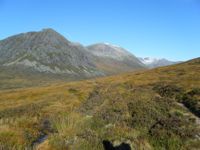 When I came back in March, the weather was like this, 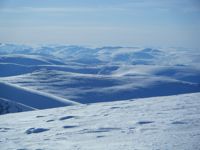 When I got here on Monday, the weather was like this, 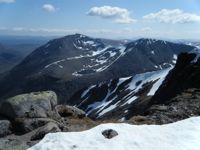 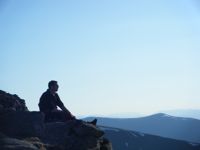 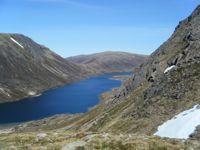 I can't believe my luck :o)

I started the week with Braeriach, reaching the summit five hours after getting off the train. The next day I took a leisurely stroll round the tops of Cairngorm's northern corries with a mate. On Wednesday I climbed Beinn Mheadhoin (my no.1 target for 2011). Yesterday, I walked over the Moor of Feshie to Loch an Eilean, but forgot my camera. Gutted.
Today I was going to climb Cairn Toul from Glen Feshie, but it's gusting 60mph with patchy showers and cloud on the tops. Weather situation now normal.
It's time for a day in the coffee shop with my book. 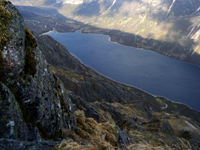 Addendum: by lunchtime, the tops were clear and from my seat in the coffee shop, I was being summoned up Sgòran Shu Mor.
I didn't set off until 3.30pm, but had six fantastic hours on the Glen Feshie ridge.